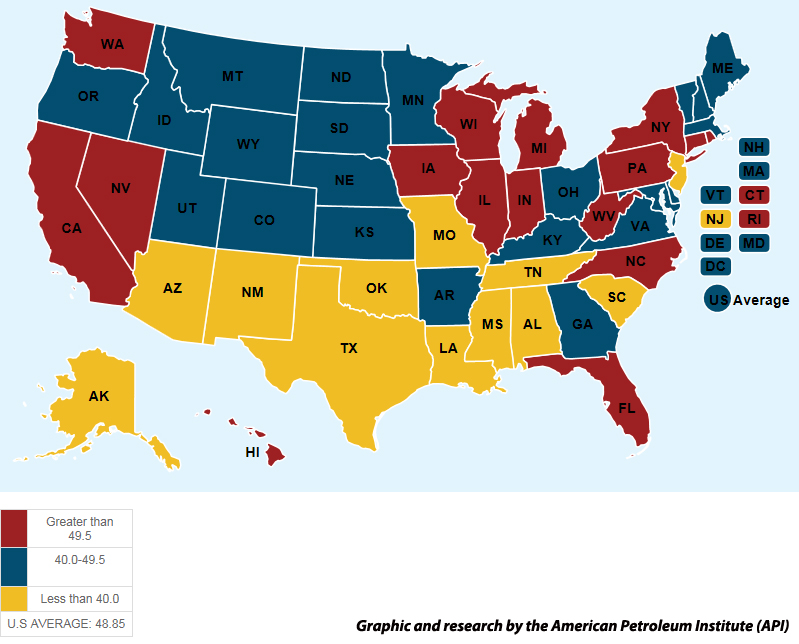 I don’t make it a habit to advocate for higher taxes.  And I’m not making any plea for the same.  However, I found it interesting just how much the roads around here suffered in what I would call a rather light winter.  Light winter?  Yep.  We got snow early in November, and then didn’t get much of any except for an eight or nine day period in February that hit us with three sizable snow falls.  My point it, for such a mild winter snowfall-wise, why did the pot holes seem bigger when the thaw came in early March?  So I started looking into why cities like Cincinnati and elsewhere drew so much attention for the breakout of potholes almost everywhere.  Before long I was connecting potholes, fuel taxes and auto insurance.

Believe it or not the national debate about our crumbling infrastructure which includes roads and bridges is legitimate.  The debate stems from decades-long neglect and poor maintenance and preventative care.  As usual, as tax payers we’ll got stuck with the bill regardless of how this all works out.  President Obama loves big government and he has advocated for spending on roads and bridges.  The massive bailout programs including hundreds of millions of dollars sent directly to the states for bridge and public works projects were more politically aimed than strategically figured out.  Of course, all this is just my opinion but I have connected the dots.  My nephew, who at the time was engineering bridge remediation in Missouri at the time, reported matter-of-factly that his company didn’t have to hire a sole for their work.  So much for the job development objectives of the federal bailout money!  We’re still left with potholes, fuel taxes and auto insurance issues.

How does auto insurance enter into an issue about our roads?  Well, every year our customers encounter potholes in our roads that damage wheels, tires and more.  Then there are those customers who swerve to avoid them and strike parked cars or other motorists.  Some of the accidents are severe enough to cause major damages and injury.  Potholes have their cost and not just in maintenance costs to repair them.  These types of claims, when they are made, fall in collision losses that can trigger auto insurance benefits.  These are collision losses by definition.  As collision losses they get tacked onto your claims record and impact the premium you pay in future years.  And when we have the annual pothole breakout, insurance claims rise too, just like our taxes.

Michigan’s governor recently championed a constitutional amendment that would have helped fund road repairs for a state that suffers more winter than we do in Ohio.  I won’t go into the politics of the move but Michiganders turned back the proposal by wide margins, a landslide against the measures.  As typical of our politics these days, Democrats wouldn’t support the legislation to raise money to fix the roads unless they could create some new taxes for them to spend.  So, the proposal would have raised about $2.2 Billion new dollars, only about $1.2 Billion which would have went to fix desperate road conditions.  And all of this led me to look at fuel taxes.

I have put a table below to outline fuel taxes across the 50 states.  The federal tax on every gallon of fuel you buy is 18.4 cents.  The taxes you see in the graphic from the American Petroleum Institute (API) should the total taxation on each gallon.  I found it ironical (i know, that is not a word) that Ohio collects 28 cents for each gallon for state fuel tax, but Michigan collects more road taxes than 40 other states and still isn’t collecting enough to keep her roads in reasonable condition.  Diesel taxes are higher but not a lot higher.  Many argue that heavy trucks cause the damage to our roads to a far greater amount than hundreds of cars.  It only makes sense that an 80,000 pound truck beats on the roadway a lot harder than a 4,000 pound tractor/trailer combination.  In Michigan, there is only a 4.15 cent difference between the fuel tax for gasoline and that for diesel.  My elementary math says that a 80,000 pound tractor/trailer combination is 20 times heavier than a 4,000 pound car.  Shouldn’t we ask the heavy haulers to pay more?  (By the way, the difference in fuel tax rates between diesel and gas is 6 cents which is a move in the right direction.)  This is the nexus of potholes, fuel taxes and auto insurance.

I’m not an advocate for more taxation but when I can find it in my heart to support taxes, I like consumption taxes.  That is, heavy haulers should pay more since their burden on the infrastructure is higher, maybe up to 20 times higher on the basis of weight alone.  If I can get behind higher road taxes, I also can’t abide on the neglect that our government administrators have demonstrated for years.  On the federal level, road fuel taxes are diverted to green energy research, funding light rail, and other people movers.  For our politicians to cry about the lack of funds to build the 1-75 bridge over the Ohio makes we wonder why it was ever OK to divert road fuel tax receipts to solve solar energy or light rail initiatives?  And I don’t like tolls.  That punishes you and me without asking the heavy haulers to pay an even greater percentage of the cost of maintaining the roadways which serve their economic interests.  I’m just not a fan of asking every people like you and me to pay for our roadways when we put the least wear and tear on the roads.  OK, all my opinion and point of view but how long can we ignore potholes, fuel taxes or auto insurance costs?

The point is that potholes, fuel taxes and auto insurance are all important and they have a nexus on our roadways.  I hate it when a client has a pothole incident that doesn’t crack the deductible but costs them hundreds out of pocket.  And when accidents occur brought on by poor road maintenance conditions, it doesn’t seem fair that the client and their insurance should pay for something brought on by a massive pothole.  I just can’t excuse politicians and government administrators for distorting our priorities to suit their politics when fuel taxes are being paid to maintain roadways, not build expensive trollies and light rail.  I like it even worse when politician sell a massive new tax on their constituents in the name of fixing roads, where the roads will get only about 50% of the money raised.  It is just time to expect our politicians to use the funds we pay them to fix the potholes, build or repair our bridges, and stop telling us they don’t have enough money.  Even if taxes need to go up to build the 1-75 bridge or fix our crumbling roads, it is hard to believe we’ll get what we think we’re paying for when politicians are managing the purse strings.  We deserve better and it is up to us to get what we pay for.  Do you agree?

Here are the current tax rates for diesel and gas for the fifty states: