What Will Happen & How to Protect Your Eyes

The 2017 Total Solar Eclipse will be the first one viewable in the USA in thirty eight (38) years and we will be able to view this rare astronomical phenomenon almost everywhere in the USA. A total solar eclipse occurs when  the sun, moon and earth line up in such a way to cause the sun to be blocked out by the moon to observers on this good earth. As the eclipse progresses it will get darker and darker during the middle of the day until it is eerily night-like as the highest percentage of the eclipse occurs. For us in West Chester, OH, about 10% of the sun will remain visible. I actually experienced the last total eclipse in 1979 and remember that birds stopped singing and it became quiet and eerily dark in the middle of the day. It is worth the experience. 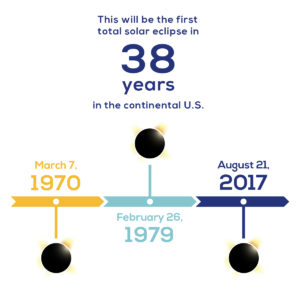 Mark your calendar. The eclipse will occur during the day on Monday, August 21, 2017. The 2017 total solar eclipse will be viewable to a large swath of the United States running from coastal Oregon and crossing the USA diagonally to a point it is last viewed in coastal South Carolina. Most Americans will  will see at least a partial eclipse and this is a treat in and of itself.  In Cincinnati, OH we will have only a partial eclipse that can be viewed but the percentage of sun blockage will be over 90% making West Chester and Southwest Ohio a prime location to observe the eclipse.

The eclipse will start in Oregon at around 9:04 AM and proceed its movement across the country from West to East. In Cincinnati, the 2017 total solar eclipse will start at about 1:01 PM when the moon first begins covering the sun. The eclipse will last about two hours and fifty minutes. Maximum solar coverage will occur at about 2:29 PM, according to NASA and timeanddate.com and other websites.

The most important information that you need to know about viewing the 2017 total solar eclipse is in eye safety. Looking directly at the sun, even for an instant, can cause catastrophic damage to sensitive light receptors in the eye. The first rule of business should be SAFETY FIRST. The American Astronomical Society has published good information about the type of light filter eye protection you should use. The most important marking you should seek to verify on your viewing filter is the ISO 12312-2 mark. In this day and age you should verify both the marking and the manufacturer and I’d go one step further. I’d also only buy glasses from reputable retailers like Amazon or Walmart to make sure you have a product that is backed by an organization that has the means and the personnel to verify that viewing lenses they are selling make the grade. After all, when it comes to your eyes, observe SAFETY FIRST. You should not use these intense light filters without verifying they comply with the ISO standards. You can’t do this yourself unless you have the expensive spectrophotometer device used to measure the UV, visible and infrared light capabilities of the lens filter. If you can’t find these viewing filters at a retailer, consider the box viewing method. 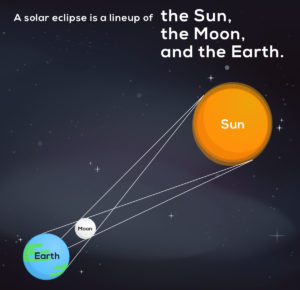 The longest duration of the totality of the eclipse will occur in the Southwest Kentucky area and will last about 2 minutes forty seconds. This remains approximately correct for Cincinnati where the maximum eclipse phenomenon will be about 140 seconds. Here is a couple of links to where to find the protective viewing glasses. This is not an endorsement of these products and I remind you that you buy at your own risk. I say that because I have heard that even Amazon has refunded money to customers buying ISO marked glasses after they could not confirm that the glasses sold as safe met the ISO 12312-2 filter standard. That said, Amazon at least is being vigilant and you should be too. Pricing varies but you should expect to pay $10-$15 for each pair. Expect them to be sold in the Amazon Eclipse Viewing Glasses multipacks.

Walmart sells something similar on a store by store basis but I’ve heard that many are sold out in the Cincinnati area. Viewing glasses do not appear to be available online anymore. With the 2017 total solar eclipse little more than four days away, you might need to pay for expedited shipping. And the final thing that might change everything is the weather. We need to have clear skies to view the total solar eclipse and right now, based on early forecasts, the best weather is to be out West and potentially the worst in South Carolina. It is a mixed bag for us in the middle of the country but odds are better than 50% that we’ll have enough clear sky in Cincinnati to view the eclipse.

As a simple summary, the eclipse will occur for us in Southwest Ohio beginning just after one o’clock and will progress for just less than three hours. The height of the eclipse for us will be at about 2:29 PM. For all direct viewing, used ISO 12312-2 and CE marked glasses obtained from reputable sources and in all things, protect your eyes from direct viewing of the eclipse